Limited parking by the entrance, please do not block the access track

Public footpath runs through the site

Very difficult for wheelchairs, pushchairs and those with limited mobility due to the topography of the site

This former sand and gravel quarry became the Trust's first geological reserve when it was purchased in 2001 with a grant aid including landfill tax credit. It is part of a wider Site of Special Scientific Interest (SSSI) which extends to the west of the road (this section is in private ownership). It is also designated a Regionally Important Geological Site (RIGS).

The sand and gravel quarry at Welton-le-Wold ceased to operate in the mid 1970s after nearly a century of excavations. The deposits at Welton-le-Wold are of critical significance in understanding the glacial history of Lincolnshire. It is important because it contains an unusually complete sequence of deposits that were laid down during the late Quaternary Period (over the last half million years). The Quaternary, also known as the Ice Age, was a time of extraordinary changes in the global environment. Periods of widespread glaciation were interspersed by more temperate climatic conditions similar to that of today and at times warmer. During the cold glacial periods woolly mammoth, woolly rhinoceros and reindeer roamed over southern England but in the warmer interglacials animals such as elephants, hippopotamus and lions were present.

Animal fossils found at Welton-le-Wold include a tusk and teeth of straight-tusked elephant and remains of deer, horse and bison. Prehistoric flint tools have also been discovered, and geologists and archaeologists have been seeking to determine whether Stone Age man and the animals occupied the Wolds at the same time.

Nearest postcode LN11 0QT. Please note - postcodes are for the nearest registered address as we are unable to get postcodes for nature reserves. 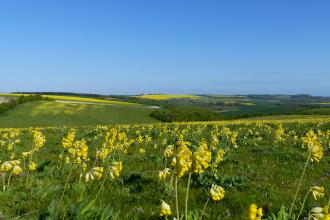 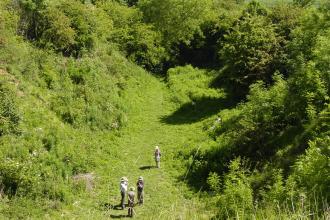