Catherine takes a visit to Riseholme College to see the propagation work that Conservation Officer, Mark Schofield, has been working on with local students.

Conservation Officer, Mark Schofield, has been busy collecting seeds from wildflowers across Lincolnshire. Using a careful approach to selecting which flowers to collect from he has created a bank of seeds from which to grow wildflowers in a controlled environment. By enlisting the help of the Horticultural Unit Manager, Andy Moore at Riseholme College and gaining permission to use an unused polytunnel, Mark has created a space for seed propagation.

Mark has organised regular meet-ups at the college on Wednesday afternoons, to which the public are invited to offer their time. Simon and I have attended some of these sessions which has given us a great opportunity to meet local people with similar values and hear about their opinions on many subjects – often political and environmentally based!

At these events we are given basic instructions on how to best fill our seed trays with peat-free compost, and how to evenly distribute the seeds we are given. Just some of the flowers we have propagated include the rare tall thrift, betony, lady’s bedstraw and musk mallow.

This week the task was slightly different – seeds we had planted a few weeks before, now needed to be moved into larger pots. Andy showed us again how to correctly fill these pots and how to carefully transfer the plant plugs into them without damaging the root system or compacting the compost too much. 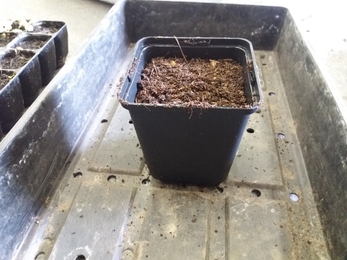 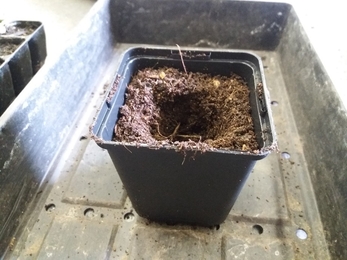 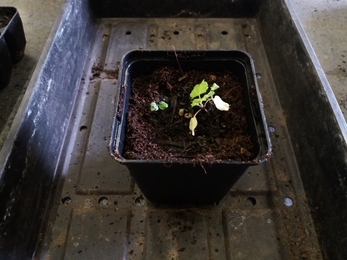 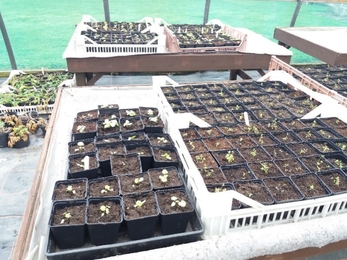 Some of the seed tray cells appeared empty – and whilst this may be the case if seeds weren’t correctly deposited – it is likely that the seeds hadn’t germinated yet. These cells are left to allow germination at a later date.

Often in big seed companies, any seeds that don’t germinate within these early time frames are usually disposed of. The problem with this, is that you create a gene pool from only a select few seeds. The onward effect of this lack in variation is shown when environmental conditions change and the gene pool doesn’t have the ‘right’ qualities needed to succeed.

For example, perhaps the seeds which have germinated did so because of ideal temperatures, but due to genetic variations the un-germinated seeds require higher temperatures. In a world which is warming up, it would be vital to save the un-germinated seeds for the species to survive. By originally un-objectively collecting seeds from a variety of individual flowers, including those that perhaps look less appealing, and leaving the seeds to grow in their own time, you allow for this variation to persist in the gene pool.

When the plants have grown they will be available for planting out into receptor sites. For rare wildflowers such as tall thrift, Mark is providing another chance for the flowers to do well and prevent becoming extinct in the county.

Another benefit of growing these flowers is the affect they will have on pollinators and other wildlife. By providing these flowers to turn species-poor areas into diverse habitats, Mark is enabling the Lincolnshire Wildlife Trust to create a wilder Britain one step at a time.

We all love to get outdoors with our dogs, for the fantastic exercise and the chance to explore together. Here are our key facts and…

Communications Officer, Rachel Shaw, on a favourite meadow flower spotted near to her home in the centre of Lincoln and the loss of…